Just Get Over It

June 27, 2018
As we remember Robin William’s life, not only was he a comic genius, exceptional award-winning actor and a giving philanthropist but also let’s not forget the elephant in the room. He, like most or all of us, was running from his demons.
He openly talked about his emotions and feelings, his life highs, how great life was as well as being so low down in life because of depression suicide was often thought. We know this as being bi-polar and/or manic depressed. His life is a great example of how having money and being a celebrity won’t buy you happiness.
Even though he received counseling for his depression, the demons continued with the use of alcohol and drugs. While being sober, his bi-polar manipulate his brain to where he was sad and hurting too much for him to continue life.
Most people look at suicide as a form of weakness, they think it is the unforgettable sin, and it’s selfish that their mess is left for someone else to clean up. They think people should just get over whatever is getting them down and sad. Just get over it?!
As a survivor of suicide, I can tell you it’s more than just getting over it. Robin Williams did the right thing by seeking professional counseling, I don’t know, but I sure he was prescribed medication to assist with bi-polar, and he stay busy with his acting and comedy acts. We will never know his main reasoning for his life ending act but let’s use it as a way to help other people who are bi-polar, manic depressed, or suicidal.
We need more education about signs of depression or suicide thoughts so to be able to help our loves one and even our enemies. We need to talk with the young children it’s alright to be sad but teach them to open up about their feeling and emotions that way others can know how to help. People need to recognizes when one is mentally ill too long to get profession assistant for them.
Robin Williams has gone to a place where we soon will be – in the ground. Depending on your believes, he is in hell, Heaven or some believe there is no spirit in us so his body is just in the ground. Whatever you believe in our time is coming.
Let me know what you think. What is your comment?
I am now a motivational/Inspirational Speaker. If you need a speaker for your next event contact me by E-mail: James@professorofperseverance.com and visit my Website at: http://www.JamesPerdueSpeaks.com
Go to Facebook and LIKE click here https://www.facebook.com/JamesPerdueSpeaks?ref=hl

June 27, 2018
Today is a date that when Americans are asked, “Where ere you on 9/11?” Most people will answer with in school, at work, just getting out of the bed, or something similar because of the tragic event that took place that day. In honor of all people who lost their lives on that day, Americans must live their lives without fear so the terrorists don’t stripe our freedom from us. We must continue our journey here on Earth but not forget the brave who allows us to conquer and survive. According to Friedrich Nietzsche, “That which does not kill us makes us stronger.” On that quote, when asked, “Where was I on 9/11?” I respond with, “What year?” Of course I know they’re asking about the year 2001 – thirteen years ago today. Even though I prayer for our country and pray for the survivors of that day. Plus, the ones who gave their lives but soon after that prayer I thank God food him to let me live. Thirty-one years ago, my life as I knew it died and living as a quadriplegic was born.
Read more 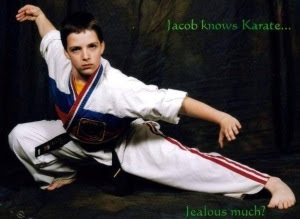 I remember being in church while still pregnant with Jacob. A friend told me he would be a peace maker and he did indeed become that. He was half like his older brother Jordan in that he was very outgoing and likeable. He was half like his middle brother in that he was a quick learner. There were never many fights between the brothers and when they started karate they became the three musketeers. Jacob was always a happy boy. That is why when he took his life on Oct. 4, 2007 it caught me by surprise. Yes, as a fifteen year old he was going through some things but nothing I viewed as insurmountable for Jacob. He was having headaches that our family doctor was in the process of evaluating and he had recently been dumped by his girlfriend and that hurt him deeply. Sadly it was to much for him to bear and he committed suicide. It has taken several years to get over the pain and even now there are still times when it hits me like a ton of bricks. One thing that has helped me to deal wi
Read more

June 27, 2018
When starting school the first day should be exciting and memorable. It should be exciting meeting your teachers and your fellow students while knowing this is the beginning of a new chapter of your life. This was the beginning on my doctoral degree in education; full of excitement I bought my first book a few weeks before class. The cost for a used book was $98.50. Later I learned, books could be purchased online and sometimes the books would be cheaper. The same book that was $98.50 as a used book was $37 brand-new online. I decided to return the used book for a refund. I got to the university fifty minutes before my first class so to return my used book and get refunded $98.50. When standing outside of my car and started pivoting so to position myself to sit down when I noticed my wheelchair had rolled away from me. Cautiously sitting down inside the car, waiting for someone to retrieve my wheelchair and hold it in place for me so I get to the bookstore. After a few minutes, some
Read more